When working with wire ropes, it is important to understand fleet angles. Typically, they are defined as the angle between two lines. The first line extends from a fixed sheave and runs to the flange of a drum. The second line extends from the same fixed sheave in a perpendicular line to the axis of the drum. Helical grooving drums require the helix angle of the groove to be either added or subtracted from the fleet angle (as described above), which determines the actual fleet angle. 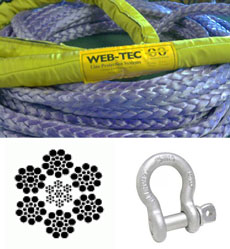 It is recommended that the fleet angle is limited to a range between 0.5° and 2.5°. When the fleet angle is not enough (less than 0.5°), ropes will pile up at the drum flange. As a result, they will fail to return across the drum. In many cases, this can be alleviated by using a kicker device. Another option includes increasing the fleet angle with a spooling or sheave mechanism.

Do not let wire ropes or verope pile up because, in time, they will roll away from the flange. This creates a shock in the load (in the structure of the mechanism and the rope). Avoid this problem because it creates unsafe working conditions.